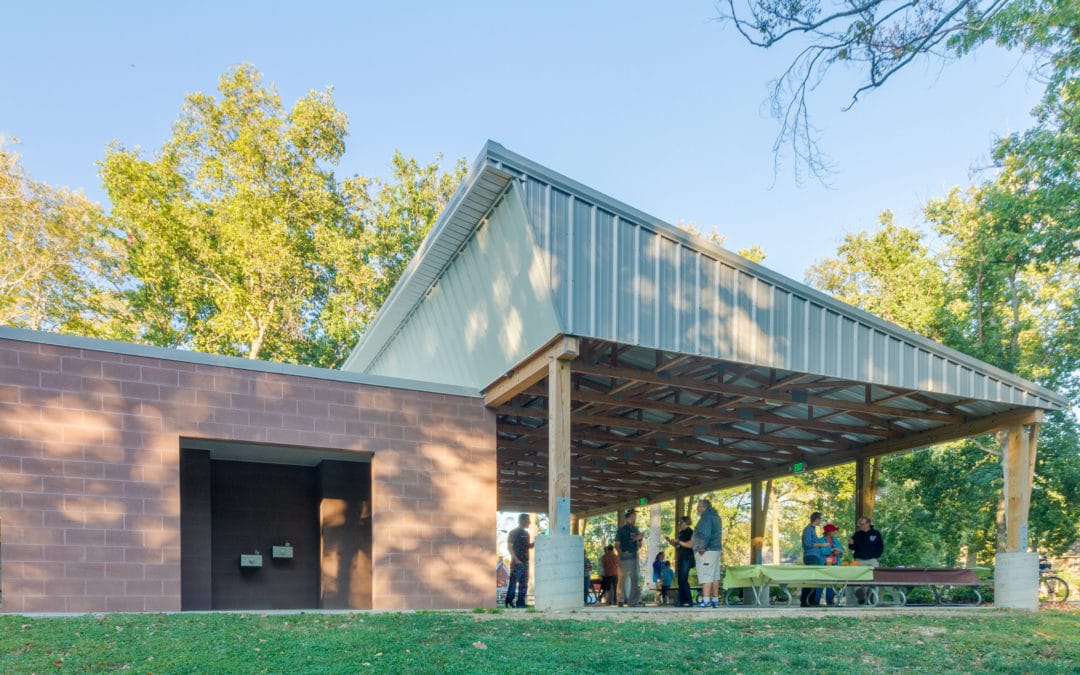 Driving west on Park Avenue from downtown Mansfield, the stone structures which mark the entrance to Mansfield’s South Park are quite formidable. And turning onto Brinkerhoff Avenue, it is hard not to also notice the pavilion that has, for over one hundred years, anchored the institution.  From its original existence as part of Sherman-Heineman Park, it has provided a venue for multitudes of civic events, picnics, family reunions, and numerous park users.

During that time, the building itself has had several iterations, each one touching the hearts of its then-time users.  From a basic shelter, which provided a refuge from the elements, to a larger, pole-barn style building that was used as the setting for numerous productions of the Children’s Theater, the shelter has always been a stalwart presence. 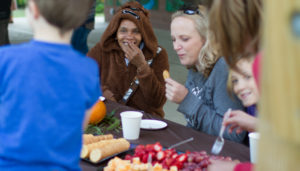 So in 2015, when the need to overhaul the facility became clear, the Mansfield City Parks Department knew that any change would have to settle into the heart of the community, and the heart of the park, in a way that would not jostle the memories of thousands of citizens. This occurred after a time when, due to budget constraints, the City of Mansfield had not been able to attend to many of the city’s parks’ needs. According to Parks Superintendent Mark Abrams  “we basically started over from scratch.” A conversation with park volunteer, and local architect, Mathew Stanfield led to a discussion about possible designs for a new pavilion once it was determined that the existing pavilion was beyond repair.  And funding from a 2013 voter-passed tax levy would allow the Parks Department to address the situation.

Designing and constructing the new facility was assigned to the care of FiELD9: architecture, Matthew Stanfield’s firm, which could be trusted to treat the site sensitively, keeping in mind not only the pavilion’s location within the park, but also its place within the community’s collective memory. Several public meetings were held to foster community engagement with the design process.  Citizens’ attachment to the existing facility was made clear during this time, but it was also clear that the 60-year-old structure needed to be replaced, as it was in quite a state of disrepair. In addition to open meetings, the building’s design was posted on the internet for public input. 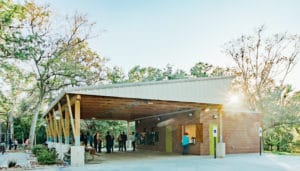 Throughout the project, there were several design versions of the pavilion based on community input and budget constrictions. As a rule, FiELD9: architecture considers site location, environmental impact and historical significance when addressing any new or remodeled construction.  In this case, the firm recommended slightly reorienting the front of the pavilion so that it faced more toward the interior of the park, allowing visitors to enjoy the park’s landscape, a view of the blockhouse and giving parents a clear view of the playground while children played. The original version of the project included a “living roof” which was not part of final construction due to budget constraints.

The new open-air facility, (not dissimilar to the original building – which was also open-air), included seating for approximately 100 people, and standing room for 250.  Also included were modern kitchen facilities and attached restrooms. Consideration was also given to parking, which could overflow onto the adjacent street, as necessary.

The new shelter sits nestled on the original pavilion’s location in South Park. Not far from it reside Mansfield’s first blockhouse, as well as several new historically-inspired buildings – an effort on the part of the Friends of the Parks to develop an opportunity for a cohesive historic/educational site. Also adjacent is a community garden, as well as the children’s playground and the gardens and walking trails that were original elements of the park. The pavilion continues to be reserved for its intended purposes: community events, family reunions, picnic-goers and the like. Thus proving that with sensitive design, even a new facility can breathe life into a century’s old landmark.